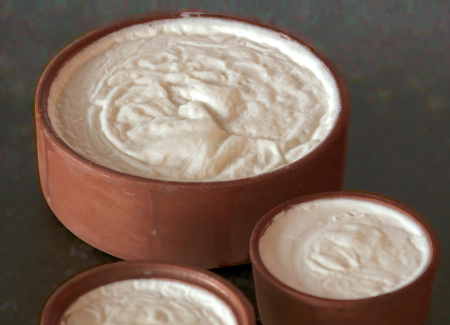 Greek yogurt, renowned the world over for its quality, density, and unabashed, delicious sour taste is a product of the country’s pastoral traditions. Up until fairly recently, yogurt production was ruled entirely by farming and seasonal conditions. Sheep and goats provided most of the milk Greeks consumed. Yogurt was always made with sheep’s milk and was seasonal, produced from late fall to early June.

There were two reasons for the seasonal production. Sheep produce milk from the moment they lamb until the summer, when the heat and the shortness of plants to graze on naturally will condition them to dry up. The heat of a Greek summer was never ideal for dairy production. Yogurt needs to be kept cool once it is set, and until the 1950’s refrigeration was rare outside cities. The storage cellars, cool enough from fall to spring, loose their chill in the summer.

Yogurt was made immediately after the milking, when the temperature of the milk is the same as the animal’s and ideal for the addition of the lactic acid bacteria that turn it into yogurt. The shepherd would simply add a little yogurt from the last batch as starter to the fresh milk. He would keep the containers covered and warm, probably in the room where he made his cheese.

In Europe, the health benefits of yogurt were acknowledged early last century, and yogurt production in the West catapulted into a huge industry. The large yogurt dairies in Western Europe are defined by two factors: They make yogurt with cow’s milk, and they add fruit and fruit preserves. Cow’s milk yogurt is thin in texture and can be very acidic. Adding sweetened and preserved fruit makes the yogurt richer in texture and erases the sour flavor. Yogurt has become synonymous to a healthy, sweet snack.

In Greece, the dairy industry has also adopted the use of cow’s milk which is plentiful and produced year round. But instead of sweetening the sour and thin yogurt, we use a time-old technique: We strain it. The result is astounding: a dense creamy mass which has lost most of its sourness with the whey.

Strained yogurt became more and more popular after the Second World War. Large modern dairies devoted entire rooms to yogurt draining; Cheese cloths bulging with yogurt would hang from the ceiling, dripping the green-yellow whey into plastic drums. Today the titans of the dairy industry no longer use cheesecloth. They strain the yogurt centrifugally, a more efficient, automated practice.

We Greeks have taken to strained cow’s milk yogurt. Greek-style strained yogurt has recently exploded in the U.S. and European markets. American chefs and cooks don’t restrict it to Greek or Mediterranean cuisines. It appears everywhere, a beautiful re-incarnation of a stellar ancient food.

In Greece, yogurt is an addition to every meal: scooped over rice pilaf, dolloped in tomato sauce; served with stewed and fried vegetables, meatballs, and grilled meats. It is used as a sauce, baked over chicken and certain beef dishes until it sets and thickens like béchamel. It is used as a condiment, stirred with shredded cucumbers and garlic to make the well-known dip tzatziki, or spooned onto savory squash and cornmeal pies, a tradition in Greece’s northern mountain regions. In some areas it is even served as a cool summer soup. Swirled with honey or spoon sweets, yogurt is divine. Strained sheep’s milk yogurt was rare, and used in lieu of cream in desserts like roasted caramelized quince, or as a pudding with honey and walnuts. A more regular treat, still a favorite with children today, is “yogurt skin”, scraped off the top of the yogurt and sprinkled with sugar.

There are many wonderful restaurants for fine dining in LA, but Delphi Greek Hellenic Cuisine…

The temperate isles of the Mediterranean are home to sun, sea and delicious dishes thought…

Hellenic Cuisine has carefully crafted a stellar reputation for delicious food and event catering in Los Angeles for years! Be sure to call them today for an event consultation at (310) 478-2900.

This site uses Akismet to reduce spam. Learn how your comment data is processed.

Reserve a Table
Powered By: